Busch Machinery carries several types of capping machines including cap tighteners, automatic screw cappers, ROPP cappers, snap cappers and lidding machines. Inline screw capping machines are among the most popular models we sell because they are generally easy to changeover without the need for expensive change parts.  However chuck cappers offer much better torque consistency and can be configured for high speed rotary capping applications.  Oftentimes our customers purchase cap tighteners for retorquing caps after induction sealing (which tends to loosen caps), or for various specialty caps like trigger sprayers or pump spray assemblies.  ROPP capping machines use a blank shell and knurl the threading onto the cap after application to the bottle with special chucks that run the threads on the cap while rotating around it. 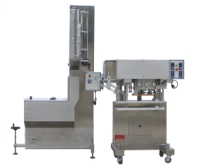 Inline screw cap tighteners are by far the most popular machines for capping most products that take a screw cap. Changeovers are easy with a wide range of bottle and cap sizes. There are also several variations of cap sorters available for flat caps, barrel caps and specialty caps using floor level elevator/sorters, centrifugal feeders, and vibratory feeders. Caps are tightened with 3 or 4 pairs of side tightening disks (depending on the model) that spin the cap on as the bottle is driven through the disks with side drive hugger belts that keep the bottle stable through the tightening process. The big advantage of an inline capper is its ease of changeover and simplicity of design.  The disadvantage of an inline screw capper is, despite improving clutch control options, that torques applied to the cap can be relatively uneven compared to a good chuck capper, and particularly so when higher torque requirements must be met.

Basically an inline cap tightener is the same machine as an inline screw capper, except it does not include a cap chute and cap sorting system (which is about half of the cost). These are great machines for smaller operations where the operator simply starts a cap on by hand and then lets the machine do the torquing of the cap. These are also great automatic lidding machines for operations that require spray caps or trigger sprayers that are hard to sort automatically.

Another great application for a cap tightener is as a retorquer. In today's tamper evident and spill proof environment many products are now induction sealed (where the aluminum foil liner of the cap is melted onto the top edge of the bottle neck).  One of the problems of induction sealing (which is done after the cap is tightened on in the capping operation) is that it tends to loosen the cap. This is where the inline cap tightener crosses over to become a cap retorquing machine.

Snap Cappers - For products that press the cap on

Snap capping machines work much like an inline screw capper does except instead of screwing the cap on with side tightening disks an overhead belt the presses the cap in place.

Rather than tightening from the sides as in an inline screw capper a chuck capper has a chuck that firmly grasps the cap and spins the cap onto the bottle from above and therefore the clutching mechanism can be set very accurately to control cap torque. Chuck Capping machines are available from single head to multiple head high speed machines. The big advantage of a chuck capping machine is its scalability for high speed operation and of course its precise torquing of the cap.  The disadvantage of a chuck capper is that each bottle size requires change parts, and if the cap sizes change all of the chucks also have to change (not to mention the possibility that sorting and cap conveying might also require change parts). When considering a chuck capping machine, one should seriously consider using the same caps for all bottles on the line, as bottle change parts are relatively inexpensive to changing chucks for a variety of caps. 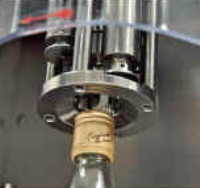 ROPP Capping Machine - A capper that forms the threads while sealing

Many customers ask us what ROPP is and the simple answer is Roll On Pilfer Proof closure.  Simply put it is an unthreaded aluminum shell that is placed on and pressed down onto the bottle neck while thread forming wheels spin around the shell and press against it to conform to the existing threads of the bottle and locking ring. In many respects a ROPP capper resembles a chuck capper although since it is not torquing a cap there is no clutch mechanism required.  ROPP capping machines are available  as a single head to multiple head high speed rotary systems. The big advantage of a ROPP capper is that it is sealing the product at the same time it is providing tamper evident security. The big disadvantage is that it is expensive to run more than one size cap. The neck and threads of the bottle must also be hard enough to withstand the pressure required to form threads such as glass or hard plastic.

Lidding Machines - Press on lids such as seen on deli containers

Lidding machines are another sealing system that is commonly used on deli type containers. Product is driven to pick up the lid from the escapement chute and then runs under a belt or rollers to press the lid on. What separates lidding machines from snap cappers is primarily the sorting system where stacks of already oriented lids are placed into a magazine instead of a sorting system to orient caps. Lidding machines can be separate units on a line or are integrated as part of cup filling machine monoblock system. 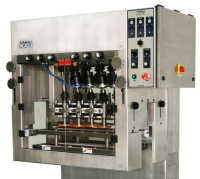